The Special Store is indeed special.

Someone told me about a little store in a littler town where the owner buys auctioned boxes from estate sales, and resells them in this little store. It’s a jumbled place. The front part of the store where an organized display has been attempted is still crowded up with stuff. The first time through I missed an important find. The back is even more jumbled. But this, of course, is the charm of the place. I love poking around a place where the likelihood of finding something good is high but the prices are low. And the prices are indeed affordable! The best of all was the lady working there that day. She was easy going, no pressure, helpful and cheerful. I loved her. My shopping experience there on Saturday was delightful and I left very satisfied.

I like to collect china, especially teacups and teapots, and I collect art. My preference for original art makes the prospect of affordability even more dim, lol. In addition, I have 2 and a half rooms in my apartment and only so much wall space and display space. I loathe disorganization and clutter. I need to be very careful about what I take in and how much I collect. Therefore long periods go by when I do not shop or even think abut shopping. But every once in a while, usually at a transition time like this week’s end of school/beginning of summer, I like to break out and do something different on my routine, to celebrate.

Saturday I drove to an antique store and I was very pleased with the quality of items they offered. I loved the art room. Frankly, I was blown away by the art there. I loved the book room, where everything was organized by topic. The clothes room contained vintage clothing of high quality. However, the price on everything was on point meaning expensive. It was out of my range.

I took a slow drive down unfamiliar roads and unpaved roads and back roads and red dirt roads. It was a bright day and I enjoyed taking photos of my bucolic surroundings as I headed up to the other store.

Jackpot. Immediately I saw a hundred things I wanted! But since I am careful and thoughtful about purchases, I took my time, and I mean, a long time. This is what I like about shopping by myself. I can take as long as I want and I do not have to worry that I am irritating the other person, or holding her up. I discovered many wonderful collectibles, plus original art.

This first photo is of a piece of art I bought. It was in the 75% off room, marked down to $4.50. It is a piece by Carolyn Shores Wright, a Huntsville Alabama artist of watercolors and prints. Her work has been licensed for reprint by Audubon cards, National Geographic, Smithsonian, Yankee Magazine and many others for inclusion on collector plates, greeting cards, porcelain mugs, stationary products, books, fabrics, wallpaper, dining products, window decorations, t-shirts, tabletop figurines. She has since returned to producing original art. Mine is an original work, an artist’s proof, signed. 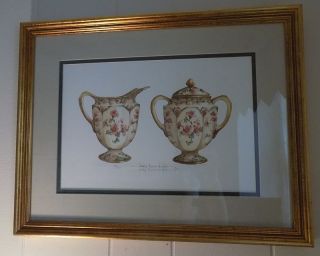 So cute!! And well framed, too. Mrs Wright’s work can be purchased at Etsy or from her own website. I hung this in my kitchen over the ‘tea bar.’

As for fine bone china finds, well, here we go.

This one is easy to date. Marks on china saying “Made in Occupied Japan” (MIOJ) were produced between 1945 and 1952. So this very cup is between 65 and 72 years old! This puts it in the “vintage” category, since “antique” doesn’t begin until an item has reached 100 years old. Cathy at the 4C’s wrote,

Following the end of World War II in 1945 and until 1952, items imported from Japan to the United States had to be marked in a fashion indicating they came from Occupied Japan. Although four different marks were used on cups and saucers during this time (“Japan,” “Made in Japan,” “Occupied Japan,” and “Made in Occupied Japan”), only the last two marks guarantee the pieces were made in the Occupied Japan timeframe. For serious Occupied Japan collectors, it is items with these two marks for which they search.

Many of these MOIJ items did not have a maker’s mark on them, so I don’t know if my cup and saucer were made by Noritake or whoever. The predominant pattern at that time was roses, so again, it makes finding the manufacturer just that more difficult.

Why were items stamped MIOJ in the first place? After Japan’s unconditional surrender in 1945, the economy was terrible, as you can imagine. Exports marked ‘Japan’ were not selling because of emotions running high, Japan being ‘the bad guys’ in the recently concluded war. People were angry for a long time about the unprovoked attack on Pearl Harbor and the loss of so many of our men. MOIJ softened the blow and while emotions ran high until Japan was on her feet again and anger subsided. As far as MOIJ being collectible, the answer is yes.

At eBay we read, It’s a piece of history from an era long gone.  Little did anyone foresee adding the word “occupied”  would create an entire new area of collecting. Unmarked pieces, which otherwise were exactly like the marked versions, are generally valued about 50 percent to 75 percent of the marked pieces according to the book “Today’s Hottest Collectibles”.

By the way, the most credible online places to find information are Kovel’s, Replacements.com, and Ruby Lane.

I found a wonderful teapot! What I was on the hunt for was not what I ended up finding. I am looking for a traditional English Fine Bone China 4-cup pot in the usual flower motifs. Like this sweet precious I passed up 9 years ago at a yard sale and never forgot it. Though it is a little big, probably why I passed it up. But I knew it was something, that’s why I took the photo. So I could torture myself. Anyway, I already own two Japanese teapots, one is a tetsubin cast iron, and the other is a crackle Kutani. I wanted an English teapot, not another Japanese looking one.

No, what I found was quite the opposite. It is by an American manufacturer, and in a deco-mid century motif at first I didn’t like but now I love. And come to find out, Hall teapots are extremely collectible. Thanks, mom, for giving me an eye. 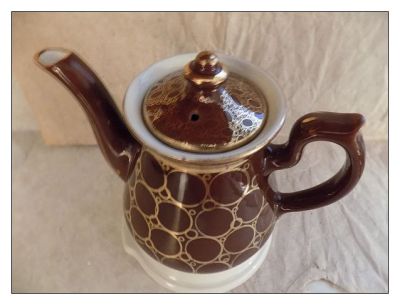 Hall is an Ohio manufacturer of china and other kitchenware. According to Kovel’s–

Hall China Company started in East Liverpool, Ohio, in 1903. The firm made many types of wares. Collectors search for the Hall teapots made from the 1920s to the 1950s. The dinnerwares of the same period, especially Autumn Leaf pattern, are also popular. Other famous patterns include Blue Blossom, Crocus, Red Poppy, and Taverne. The Hall China Company is still working. Autumn Leaf pattern dishes are listed in their own category.

All I have been able to discover so far is that due to the style of backstamp, the teapot was likely made in the 1920s-30s. Also, the style/shape is called Philadelphia. The Hall pots’ shape were named after cities and then the style was applied with its name, such as Basketweave, or Autumn Leaves. I have searched and searched but I haven’t been able to identify the pattern yet. I only found one reference to a Hall teapot in this style on a Philadelphia pot, on an original advertisement, but the writing is too small for me to read the caption. The ad printed in 1940, so the pot was introduced sometime in 1920s and was still selling in the ’40s. If you know the name of the pattern, please let me know and put me out of my misery! 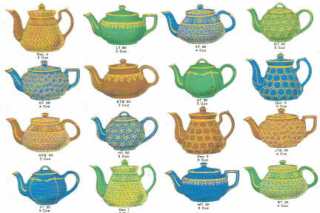 Nippon is the old name for Japan, so it makes this one easy to date. It’s a salt shaker. 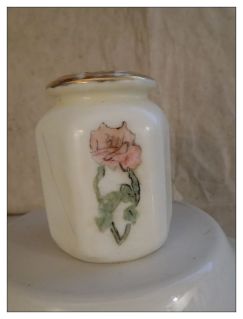 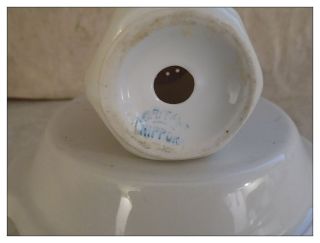 It dates from between 1891 and 1921. I know this because US customs began requiring country of origin in 1891 when the McKinley Tariff was passed in 1890. Nippon was a transliteration of Japan at the time. In 1921 it changed to Japan. So the salt shaker could be up to 126 years old. It is hand painted. I know this because the backstamp of simply ‘Noritake’ atop ‘Nippon’ means the stamp was applied to a blank piece and after the artist painted it he would add his signature. (source). They began this practice around 1911. So more likely the salt shaker is about 105 years old.

I am unsure why this piece is absent the artist signature, unless it was added to the missing pepper shaker. Anyway, I verified that the Noritake in cobalt, with slash then under that the Nippon meant that the piece was sent out as blank, to be painted later. I searched for ‘Noritake Nippon salt shaker” and I found similar ones for sale or displayed online, so…I assume it is genuine.

I found this sweet dish also. 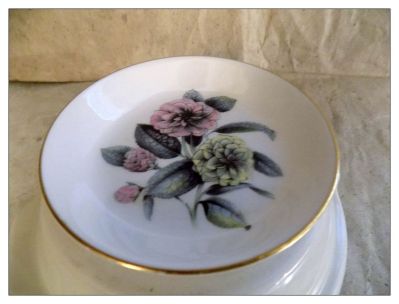 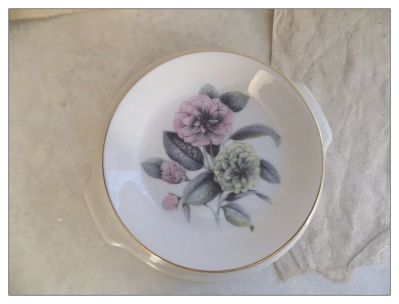 According to Royal W. backstamp history, the R in a circle in Royal Worcestershire means the dish was made between 1890 and 1921. However I got conflicting information when I went to Replacements.com and learned that this pattern is called ‘Summer Flowers’ and was manufactured after 1974 but is now discontinued. So…?? The dish feels new, not antique. It might not be old. Or it might be! I’ll keep researching. I like doing that.

I thought it was a butter pat, originally. But when I got it home it was bigger than my Spode butter pat, and I learned that it is in fact a pin dish. Women who sewed would put their pins in a dish rather than a pincushion. Dishes of this sort are also used as a button dish, trinket dish, ring dish, or just to display!

I found one other thing. It is a large serving spoon, obviously hammered by hand. The back says Hecho en Mexico Silver Plateado. It is silver plate, and according to the large capital P on top, it was made in a Mexican city starting with P. If it was M it’d be Mexico Coty, a T meant Taxco. But P?? I dunno. Not yet. Maybe Puebla. It is a beautiful and hefty piece. The lady at the store knew it too and though no price was on it,she said, “This will be $3.” I didn’t quibble. It was worth it. 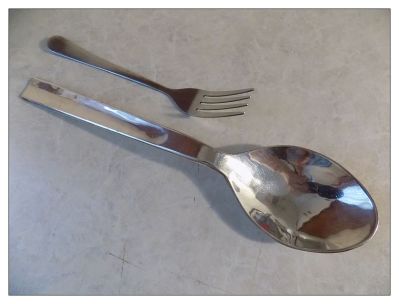 It was a fun day and the researching after I returned home was also very fun. I like adding beautiful pieces to surround myself with. I’m glad I was told about The Special Store. It was a good day!

" ... make it your ambition to lead a quiet life and attend to your own business and work with your hands, just as we commanded you,"

Since satan's original sin was pride, it is natural that he would want to see himself reflected in anything and everything. He wants to use the earth as a personal mirror, reflecting himself back to himself in as many human endeavors as possible. To this end, he has been fairly successful.
Treasures from J.R. Miller
Dinner: Super loaded nachos: topped with cheddar cheese, black olives, chicken, taco sauce, and tofu-avocado dip. Yum!
I got some stuff at The Special Store $5 fill-a-bag room. Red planter for front of the apartment, (I'll fill it with white anemones), white basket with bow for outside décor, red mug for a friend, two matching mugs for when I have company (hey, it could happen), brown plant pot, cool clock (it works), wreath hanger, AND 6 dessert plates- by Harker, a US pottery company since 1840. Pattern is Godey Prints, manufactured 1950-1960, rimmed with 22 K gold.
How we got from child of God with sword, killing sin; to injured victim on fainting couch wounded by misogynists.
Canon Fodder

Discipling Women For Discernment Through Doctrine